Green to the max

Solar panels, reflective windows, deep wells for geothermal energy. Credit Human is pulling out all the stops to make its new San Antonio headquarters a beacon of sustainability. 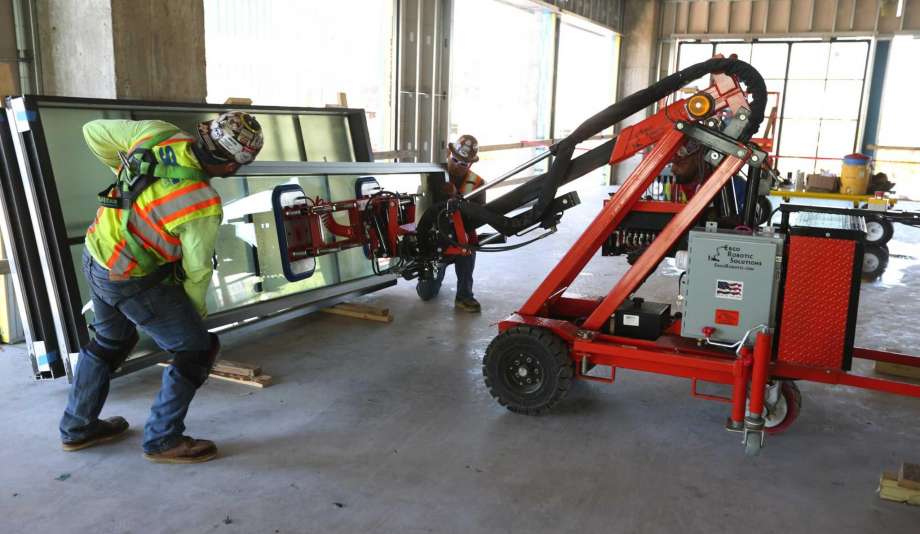 When Stephen Hennigan, the president and CEO of Credit Human, started to imagine a new headquarters in downtown San Antonio, he knew he didn’t want just an ordinary building.

It would have to be good for the environment and make sense financially. Influenced by what he learned designing his own home on the North Side, Hennigan was certain the project would use solar power, conserve water and employ the latest in energy-efficient technology.

He also wanted to take it up a notch by tapping geothermal power from below ground.

When Hennigan showed his board members how the efficiency measures, though initially more expensive, would save money in the long run, they were won over.

Credit Human decided to team up with Silver Ventures, the company that bought the mothballed Pearl brewery and transformed it into a thriving urban village. It has a track record of using green building methods.

On a 3-acre site on Broadway at Grayson, next to the Pearl, they planned two towers and a parking garage. Now under construction, a 12-story building will house Credit Human’s headquarters and an eight-story building will have office space leased out by Silver Ventures.

When completed next year, both buildings will be the first commercial ones in San Antonio to use geothermal power for heating and cooling.

The project seems like a made-to-order example of a main goal of San Antonio’s draft climate action plan: cut the use of fossil fuels for buildings, the biggest source of greenhouse gas emissions. The climate plan has proved so controversial that a City Council vote on it has been delayed twice and is now reset for sometime in the fall.

Hennigan, 55, who was a member of CPS Energy’s board of trustees from 2001 to 2011, said his ideas for the Credit Human project weren’t influenced by the climate plan, which surfaced later.

“I don’t come at this from a tree-hugger perspective. I’m not in this deep environmental camp,” he said. “I care about our environment. But you know, I come at it from a practical point of view. … We can’t kill our planet; we can’t kill businesses. We just got to do what’s basically possible today with the technologies we have.”

All three structures will be covered with a total of 2,912 solar panels, capable of generating 1 megawatt of power, enough to power 200 houses. The solar power will be used only by the Credit Human building, with any excess added to CPS’ electrical grid.

Solar and more
Both towers will be sheathed in windows that reflect 75 percent of sunlight. The buildings’ envelopes will be as tight as the hull of a ship, preventing heated or cooled air from escaping. The insulation, 4 inches thick throughout the buildings, is double the requirement of the building code, Hennigan said.

Beneath the buildings are 150 wells dug 300 feet deep that will tap geothermal energy.

“The ground has a temperature that’s persistently about 70 to 75 degrees, and that energy is there all the time,” Hennigan said. “So we can access that for heating and cooling. And that’s different than creating the heating and cooling out of some piece of equipment.”

The geothermal system will supply 100 percent of the headquarters’ heat and 40 percent of its air conditioning, which will reduce the building’s dependence on cooling towers. The Silver Ventures building will also rely on geothermal for heating and some of cooling.

Both buildings have systems that harvest rainwater and capture condensate from the air-conditioners. The water will be used for everything but drinking — from landscaping to toilet flushing. Credit Human expects to reduce its need to buy water from the San Antonio Water System by 97 percent.

“It’s going to use the equivalent of one single-family house of four for the entire building,” Hennigan said.

Even with all of its green features, Credit Human won’t be a net zero energy building, meaning it will need more energy from an outside source than it can generate on its own.

Learning curve
Still, project engineers have calculated the Credit Human headquarters will reduce its annual greenhouse gas emissions by 1,000 tons, or 2 million pounds, making it about 40 percent more energy efficient than if it had been built to the minimum efficiency standards in local building codes, according to 1703Broadway.com, a Credit Human website that explains the project.

“There’s nothing experimental in that building. Now, what’s experimental is that we’re putting them all together in a midrise. … That just is not being done,” he said.

At least not here. It’s more common in California and New York.

“They said they wanted to do something cutting-edge sustainable,” said Bill Shown, the managing director of real estate for Silver Ventures. “We’ve been learning at their footsteps, from a solar perspective, water conservation, geothermal — every single aspect of this, they have taken us to places we wouldn’t have gone ourselves, just out of ignorance.”

Working with Hennigan and Credit Human has pushed Silver Ventures to raise its game at the Pearl, Shown said. For example, it’s replacing the original solar panels on the Full Goods Building and installing new ones on another project.

There was a learning curve for the construction crews, too.

The structures’ envelope was complex and had to be just right. A full-size mockup of an exterior wall was made on site for construction workers to understand exactly how to build it.

For some work on the headquarters, Hennigan couldn’t find the expertise he wanted locally. He brought in mechanical, plumbing and electrical system engineers from San Francisco, where green building is more prevalent. He hopes that will change in the future.

Energy-efficient practices are catching on in San Antonio.

Over the last dozen years, nearly 500 projects here have been certified under the most widely used green building rating system, known as LEED, or Leadership in Energy and Environmental Design.

CPS itself, when finished renovating the former Valero building on McCullough for its new headquarters, expects a 60 percent gain in energy efficiency. The building will have a reflective roof, charging stations for electric vehicles, LED lighting with motion sensors, a rain-harvesting system for irrigation of drought-tolerant landscaping, and a high-efficiency HVAC system, among other things. The project will not include a solar array, but the parking garage is designed for a future system, according to a utility spokeswoman.

Doug Melnick, the city’s chief of sustainability, said there’s a lot of excitement about the Credit Human project.

“The goal is really to be able to show that projects like this can pencil out,” he said. “And when I’d spoken to them in the past, the idea of going carbon neutral was a goal, but we’re not there yet. But we can still get as close as possible, and I think having that local example that incorporates that best technology and provides a return on investment will really set a standard in San Antonio.”

Credit Human hasn’t publicly released the cost of its 200,000-square-foot headquarters, which will house 500 employees.

Hennigan calculates the energy-efficiency features added 4 percent to the total and will pay for themselves in a dozen or so years, as electricity and water rates continue to rise.

“The argument you’re hearing is that this stuff doesn’t make sense financially,” he said. “Well, we’re saying it does.”